January 22, 2015 – Photographer Jacobus “Co” Rentmeester filed suit in Oregon District Court, claiming Nike ripped off his photograph – the “Jordan Photo” – to create the “Jumpman” Air Jordan logo. Mr. Rentmeester is not playing small ball; he correctly notes that the Jumpman logo “has been an integral part of Nike’s marketing strategy [and] has helped establish Nike as one of the largest global sports apparel brands.” Game on.

Rentmeester alleges that he “created the Jordan Photo in 1984 at the campus of the University of North Carolina” while shooting a photo essay on American athletes preparing for the 1984 Olympics. The essay, including the photo of Jordan, was first published in LIFE Magazine in the summer of ’84. Rentmeester alleges that shortly thereafter Nike licensed, for $150, “temporary use of two 35 mm color transparencies of the Jordan Photo ‘for slide presentation only, no layouts or any other duplication.’”

Rentmeester claims that Nike then exceeded the scope of the license by using the transparencies to create what he refers to in his complaint as the “Nike Copy” – “a nearly identical photograph that unlawfully reproduced original copyrighted elements of the Jordan Photo.” (Since no infringement by Nike has been proven, and because “copy” is a loaded word in the infringement context, the so-called Nike Copy is referred to here as the “Nike Photo.”)  Nike went on to use the Nike Photo on billboards advertising Air Jordan shoes.

Stated differently, the fundamental issue in the case is whether 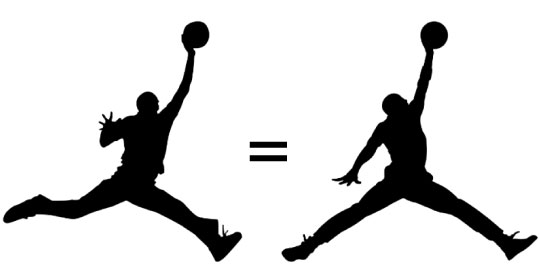 According to Rentmeester, in producing the Jordan Photo, he “created a defining impression of Michael Jordan that was unlike anything that previously existed.”  He further claims that the Jumpman logo “conveys only the elements and essence of the Jordan Photo.”  Plaintiff’s claims about his creative process are detailed:

Mr. Rentmeester, with two assistants, traveled to the UNC campus to create the Jordan Photo.  Mr. Rentmeester conceived the central creative elements of the photograph before he arrived in Chapel Hill, North Carolina.  Mr. Rentmeester wanted to maximize visual attention on an isolated figure of Mr. Jordan, and so the photograph needed to be taken outside, with a background of sky rather than the interior of an auditorium.  Mr. Jordan would be depicted in a way to express his tremendous athletic ability:  he would leap through the sky and appear to soar elegantly.  Mr. Rentmeester created the pose, inspired by a ballet technique known as a “grand jeté,” a long horizontal jump during which a dancer performs splits in mid-air.  The pose, while conceived to make it appear that Mr. Jordan was in the process of a dunk, was not reflective of Mr. Jordan’s natural jump or his dunking style.  Mr. Rentmeester further planned that Mr. Jordan would leap with his left leg forward and his right leg behind, and his left hand extended while holding the basketball, so that the basketball would appear to be perched on top of his fingertips, his body open and facing the camera, his limbs extended outward, and his right hand open, showing his fingers. … Mr. Rentmeester negotiated with UNC staff regarding the location of the photo shoot, insisting that it take place outside of an auditorium, at a remote location.  UNC staff agreed to allow Mr. Rentmeester to set up at a location on campus: a relatively isolated knoll with little visual distraction.

Mr. Rentmeester arrived at the location, examined it, and planned the photo shoot meticulously.  He directed his assistants to purchase a basketball hoop, backboard, and pole, and told them where to dig a hole for the pole and to position the hoop.

To further minimize visual distractions, Mr. Rentmeester asked his assistants to borrow a lawn mower from the UNC groundskeeping staff.  They mowed the grass as low as possible to maximize attention on Mr. Jordan’s soaring figure.

… Over approximately one half hour, Mr. Jordan practiced leaping according to Mr. Rentmeester’s instructions.  The pose differed substantially from Mr. Jordan’s natural jumps, during gameplay or otherwise (for instance, Mr. Jordan typically held the basketball with his right hand), and required practice and repeated attempts.

These claims about the unique and creative elements of the Jordan Photo seem to make the infringement question a jump ball.  But even if Rentmeester succeeds in convincing the court that Nike copied his work, his claims will still face some Kevin-Garnett-level defense.

First, while Rentmeester touts Nike’s use of the photo and the Jumpman Logo dating back to the 1980s, his complaint essentially ignores the Copyright Act’s three-year statute of limitations.  While Rentmeester may have a viable claim with respect to Nike’s recent uses of his image, any attempt to reach back to uses before 2012 are doomed.  The Supreme Court says so.

Rentmeester’s next problem is that he requested remedies that he is, without a doubt, not entitled to under the Copyright Act.  For instance, he asked the court to award punitive damages.  No, nope, nein, non, uh-uh.  Punitive damages simply don’t exist in copyright claims.  “[P]unitive damages should not be awarded in a statutory copyright infringement action.”  Melville Nimmer and David Nimmer, Nimmer on Copyright, § 14.02[C][2].  I could give you a remarkably long series of case citations for this rule, but that wouldn’t be very entertaining.

The bad news for Rentmeester just keeps coming.  He acknowledges in his complaint that he didn’t register his copyright in the seminal Jordan Photo until December 18, 2014.  And yet he asks the court to award him statutory damages and attorneys’ fees on his infringement claim.  No deal.  17 U.S.C. section 412 is unmistakably clear:  statutory damages and attorneys’ fees are not available for infringement of a work that was published but not registered at the time of the first infringement, unless registration of such work occurred within three months of first publication.  See also Oddo v. Ries, 743 F.2d 630, 634 (9th Cir. 1984).

The take-home lesson here is that you should TIMELY REGISTER YOUR WORKS.  Doing so is cheap and easy (especially compared to the cost and difficulty of litigating).  And you get your attorneys’ fees – (which ain’t cheap).  And the statutory damages available for willful infringement – if your work is registered – are up to $150,000 per work.  Even if the infringement cost you zero dollars and made the infringer no money.

That brings us to the next hurdle for Rentmeester.  Since he can’t get statutory damages, even if he were to prove infringement, he could only recover his actual damages (basically, any licenses fees he can prove he would have earned but for Nike’s use of his photo), plus Nike’s profits that can be attributed to the infringement.  Proving such “indirect” profits is not a simple matter.  The Air Jordan brand has been hugely successful – but determining how much of that success is owed to the Jumpman Logo (as opposed to the quality of the shoes, the association with Michael Jordan, other aspects of Nike’s marketing efforts, etc.) would be a daunting task.

This case presents some interesting and challenging questions about which elements of an image are copyrightable.  But because of the serious obstacles Rentmeester would face in scoring a large award, those interesting issues are unlikely to be litigated.