June 30, 2015 – Renowned San Francisco-based party band Wonderbread 5, represented by Cari A. Cohorn (while at her prior firm), prevailed on its petition to cancel the registration of the mark “Wonderbread 5” unlawfully obtained by a disgruntled former band member.

Out of the thousands of disputes the Trademark Trial and Appeal Board (“TTAB” or the “Board”) handles each year, only a tiny fraction of its decisions are designated as “precedent,” meaning that the decisions are binding on all future TTAB proceedings. (For example, the TTAB issued just 45 precedential opinions in 2014, and the same number in 2013.) This means that the ruling in Wonderbread 5 v. Gilles will significantly shape the law in similar cases in the future. (Interested readers can access the complete trial briefs and other case documents here.)

The battle over the “Wonderbread 5” trademark (the “Mark”) – like most band breakups and other occasions when a musician departs from a band – was contentious. The backstory is lengthy.

The band was founded in late 1996. The initial plan was to perform Jackson 5 songs; the band members collectively brainstormed and came up with the name “Wonderbread 5” as a play on the fact that they were white guys taking on the personas of the members of the Jackson 5. 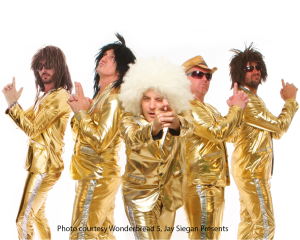 The band was notable (in addition, of course, to being known for their musical prowess) for wearing outrageous 1970s-style costumes and “Afro” wigs. They gained popularity, playing shows throughout California, the United States, and beyond.

Over time, numerous disagreements developed between Gilles and the other band members, ultimately resulting in Gilles’ termination from the band on March 10, 2009. Just two days later – unbeknownst to the remaining band members – Gilles applied to register the Mark with the United States Patent and Trademark Office (the “PTO”). On his application, Gilles stated that he, as an individual, first used the Mark in commerce in October 1996 and that “to the best of his knowledge and belief no other person, firm, corporation, or association has the right to use the mark in commerce.”

Shortly thereafter, on June 17, 2009, Gilles filed a lawsuit against the band and its members in San Francisco Superior Court, asserting claims arising out of his dissociation from the band partnership. He sought a buyout of his partnership interest in compliance with the California Corporations Code; his attorney specifically demanded Gilles’ share of the partnership’s “assets, including its service mark name, email marketing lists, website, etc.”

The Band offered to settle Gilles’ claims for a relatively modest sum of money, and Gilles accepted the offer on October 1, 2009. According to a letter from the lawyer representing the Band in the state-court case, the settlement offer constituted payment for Gilles’ entire interest in the Band partnership.

Unfortunately for the band, though, the terms of the settlement were never memorialized in a written agreement. A word to the wise: ALWAYS get a written, signed settlement agreement. The document doesn’t have to be long or complicated, and there’s no need to spend a ton in legal fees to get it done. As Wonderbread 5 learned the hard way, the failure to get a written agreement can very easily come back to bite you. Had Gilles signed an agreement releasing his claim to all of the band’s assets – including the Mark – obtaining an order cancelling his registration would have been far easier, and far faster. (The cancellation proceedings before the Board took over five years.)

On October 6, 2009, the PTO issued Gilles a registration of the “Wonderbread 5” mark. During the state court case, Gilles concealed the fact that he had applied for the registration – even though the band had served discovery that would have revealed this fact, had Gilles responded fully and truthfully. The band learned of the registration only after paying Gilles for his interest in the partnership, when they discovered that Gilles had created a website – now defunct – displaying the registration certificate and a photograph of Gilles. The band then initiated a proceeding in the TTAB, seeking to cancel Gilles’ registration.

The Band argued that the registration should be cancelled on the ground (among others) that at all times the band as a partnership – and not Gilles as an individual – owned the Mark. The TTAB agreed, holding that “at the time Respondent filed his application, Respondent was not, individually, the owner of the Mark.”

As the band had done in its briefings, the TTAB first analyzed the issue as one of California partnership law. There was no real dispute that the band operated as a general partnership. Under the California Corporations Code, “property acquired by a partnership is property of the partnership and not of the partners individually.” Given these statutory provisions and the absence of any evidence that any other partner (i.e., band member) ever transferred any interest in the Mark to Gilles, the Board concluded that “at the time the underlying application was filed, a partnership, not [Gilles] individually, was the true owner of the mark Wonderbread 5… [T]he band consisted of a partnership of which [Gilles] was no longer a member. It is undisputed that [Gilles] filed the underlying application solely in his name, with no reference whatsoever to the Wonderbread 5 partnership. As such, the rightful owner of the mark Wonderbread 5 for musical performance services did not file the underlying application.” In short, the registration was invalid.

The Board next “consider[ed] the legal framework courts and commentators have developed to deal with the special circumstances that tend to arise in ownership disputes regarding a service mark or name to identify a musical performing group” when no formal agreement sets forth the members’ rights, if any, to the band name. Thus, the Board’s decision provides guidance for bands based throughout the United States – not just those in California.

The Board quoted J. Thomas McCarthy, one of the leading commentators on trademark law, noting that problems of ownership of band names “can only be dealt with adequately by giving weight to customer perception and the identification of source and quality policies of trademark law.” That is, one of the primary purposes of trademark law is to protect the public’s ability to identify the source and quality of the goods or services they purchase – so you get what you expect when you buy a beverage called a “Coke” or book a band called “Wonderbread 5” – and that goal should be central to an analysis of ownership of a band name.

The Board adopted Professor McCarthy’s, analytical framework, presenting the issue as whether the Mark identifies a group regardless of its members. That is, in “performing group cases, it must first be determined whether the group name is personal to the individual members or not. If not, a second question then must be determined: for what quality or characteristic is the group known and who controls that quality? The answer should identify the person or entity that owns the group name as a mark.” Stated differently, the question is whether the Mark “Wonderbread 5” refers to five specific individuals (i.e., the mark is “personal” to the specific band members”) or to a group of musicians wearing a distinctive style of costume and performing a particular style of music identified with the group.

The Board held that “the mark Wonderbread 5 was not ‘personal’ to Gilles, or for that matter, any of the band members as individual musicians. Rather, the mark signified the collective ‘style and quality’ of the group.” Furthermore, “the partnership, not [Gilles], controlled those qualities.”

That is, the Mark refers to a particular “style and quality” – not to a specific set of individual musicians. Having started out as a Jackson 5 tribute band, “by its very nature, the band required the performance of five individual members – no more, no less.” Further, “’over the top’ costumes reminiscent of the 1970s were an integral part of the band’s public persona.” In fact, Gilles’ refusal to wear the costumes requested by clients and/or by the rest of the Band was one of the issues that led to his termination from the band.

Thus, “it was the partnership/group who monitored and controlled the ‘style and quality’ of the band, not [Gilles]. Clients who booked the band for performances clearly expected to see a five member Jackson 5 style tribute band dressed in overstated 1970s style clothing. Thus, the 1970s era costumes were perceived by consumers as critical to the meaning of and services offered under the Wonderbread 5 brand name.” Accordingly, the TTAB cancelled Gilles’ registration.